Here our goal is to popularize the perfect design of the Aleut Kayak. To help anyone willing to build a good sea kayak with а speed and character!

First I would like to clarify that we are calling the Aleut Kayak – Iqyax, often it is also called Baidarka. However, the name Baidarka comes from the Russian traders first visited the Aleut Islands only in the 1700s. There are pieces of evidence Aleut chains was occupied as long ago as 3000 B.C. and the skin on frame boat was already developed. The ancient Unangan and Aleut people called their boats Iqyax, so we are using the same word here.

In 1840 the Russian Orthodox priest Veniaminov referring to the Aleut Iqyax wrote: ” … is so perfect in its way that a mathematician himself could hardly add anything to its seagoing qualities” With all that perfection of the Iqyax, it is almost forgotten. The modern kayaks designs are not even related to the great design of the Aleut people. Again Veniaminov wrote describing the Aleut kayak ” ……. they were so speedy that birds could not outrun them. They were so narrow and sharp-keeled that they could not stand upright in the water without a rider, and so light that a seven-year-old child could easily carry them”  The average weight of the Iqyax is about 26 lbs or 12kg. The average speed is about 5kn. There are rumors some experienced paddlers could achieve 8/9kn.

Wow, I want such a kayak! If you are also looking for a good sea kayak that is speedy, charming, light, with amazing design proved by the thousand years of experience by the Aleuts. Then let’s build this beauty together! 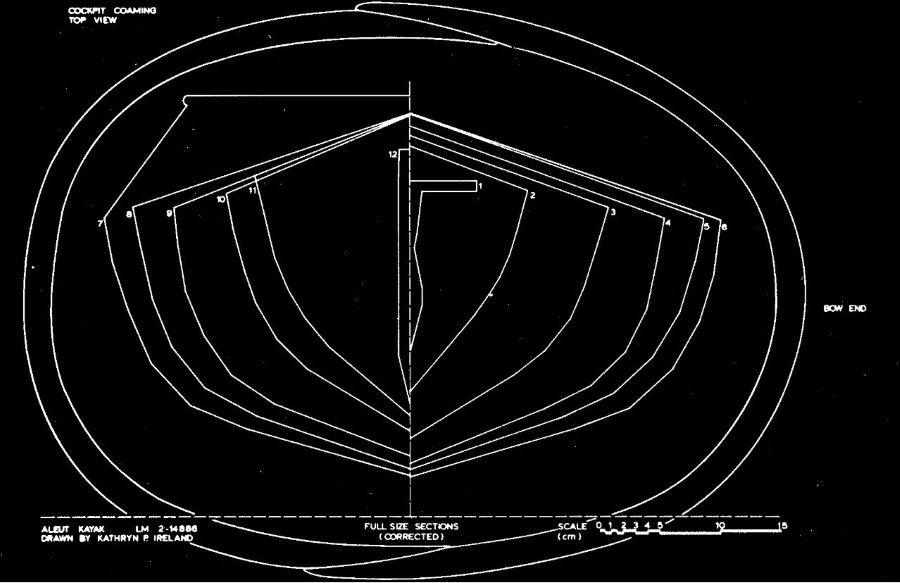 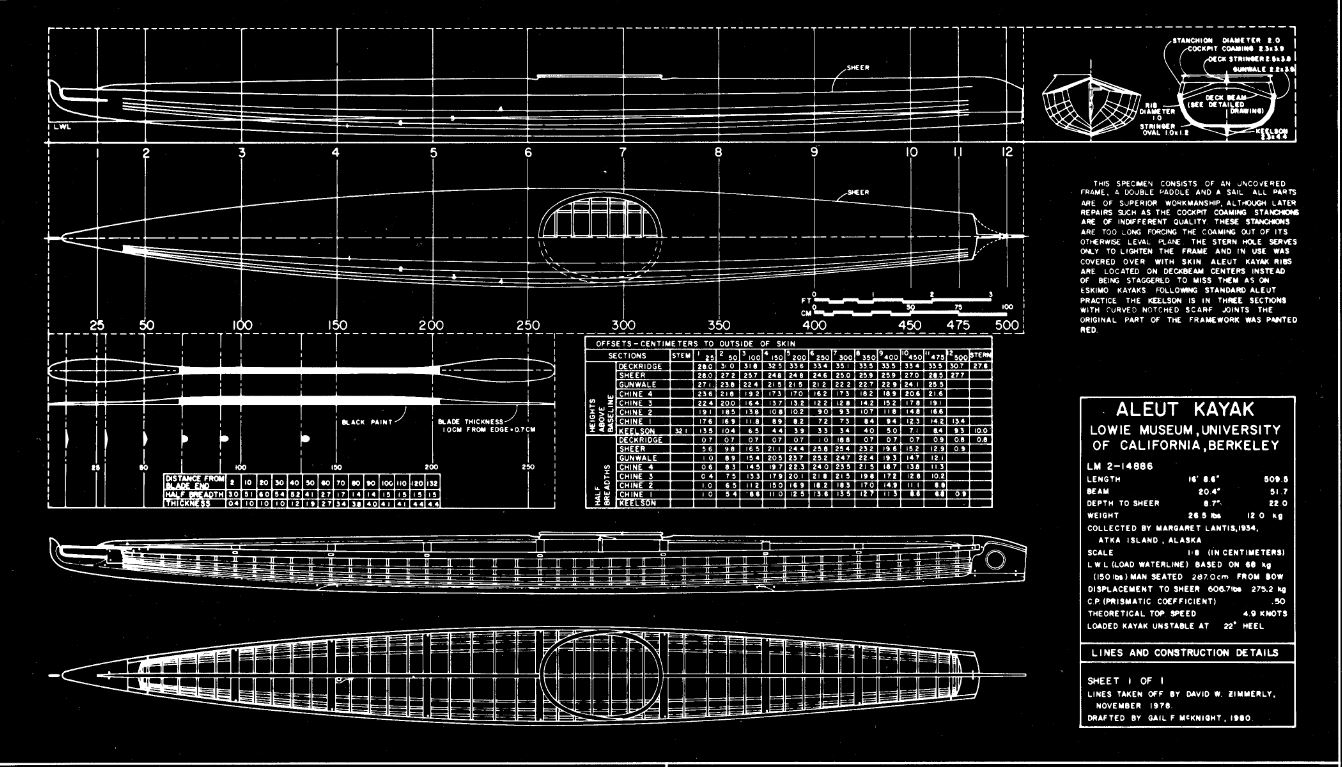 Ok, so we have the drawings thanks to David W. Zimmerly who wrote the article ” Building the One-Hole Aleut Baidarka” for “Small Boat Journal” in 1983. I will just use some zoom in to make the drawings more readable.

The most difficult is the bow section. In the figures, 1,2,3 below are measured drawings of upper and lower bow sections.

For easier working could be used pine. The upper bow piece is more easily build up in two parts; a horizontal top plate lashed to a vertical piece to achieve the shape.

The curve of the lower bow piece in figure 3 could be made from two blocks glued together and sanded to achieve the final curved shape.

The lower bow piece also forms the forward part of the keelson and should be left about 160cm. Middle keelson about 250cm. and aft keelson 150cm. to allow for later trimming and scarphing. 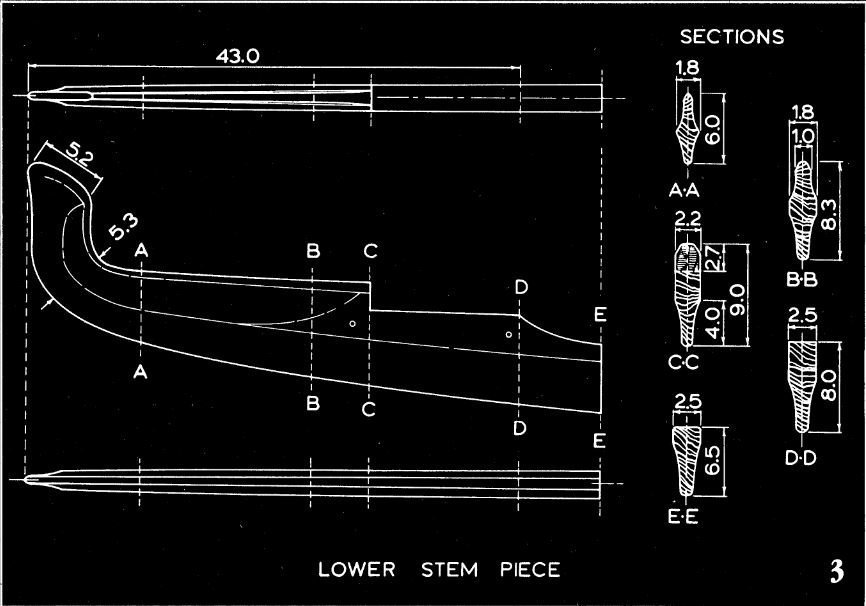 Like Mr. Zimmerly said in his article, anyone who is trying to glue or metal fasten this kayak will fail to improve it, just the opposite. The design of the Aleut kayak is such that all parts need to be lashed together! This kayak is very light and needs some movement of its parts to ride the waves with ease. So I also stress here do not use screws or glues, just lashings!

All measurements of the pieces are given in centimeters. All parts should be fabricated completely before joining them. 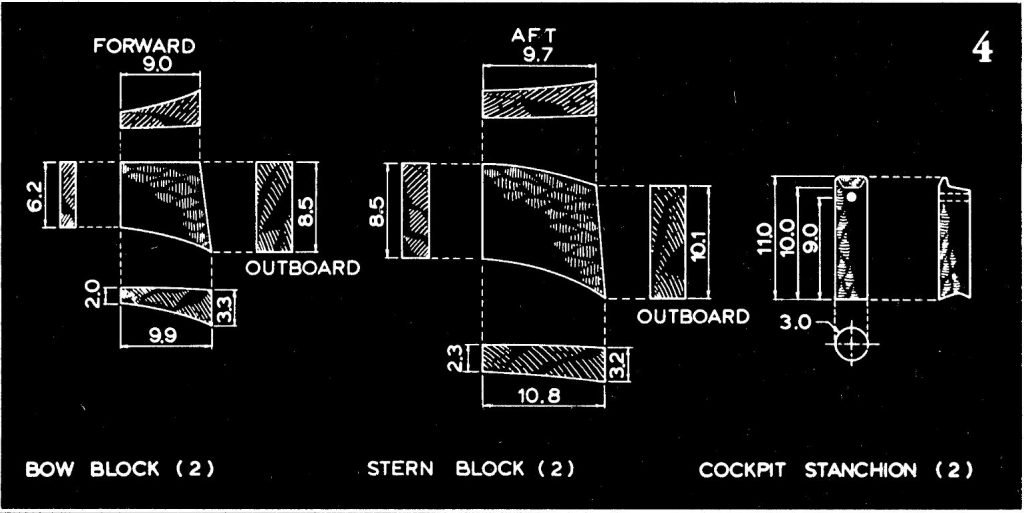 For simplicity, the bow, and stern blocks shown in fig. 1,4 and 5 can be made rectangular and one-piece. 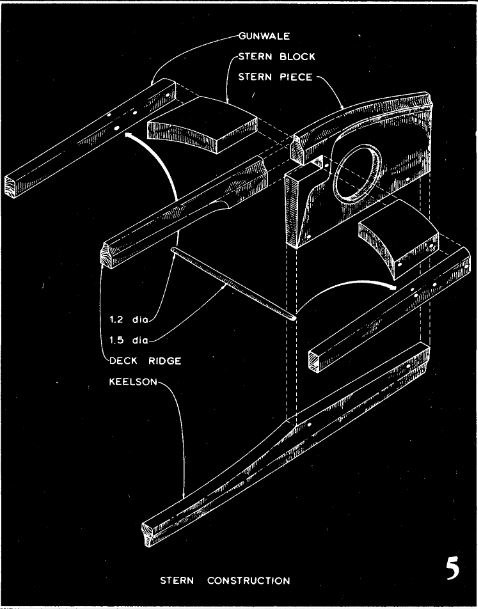 The large stern piece of the iqyax as shown in fig. 5 and 6. is straightforward in construction. 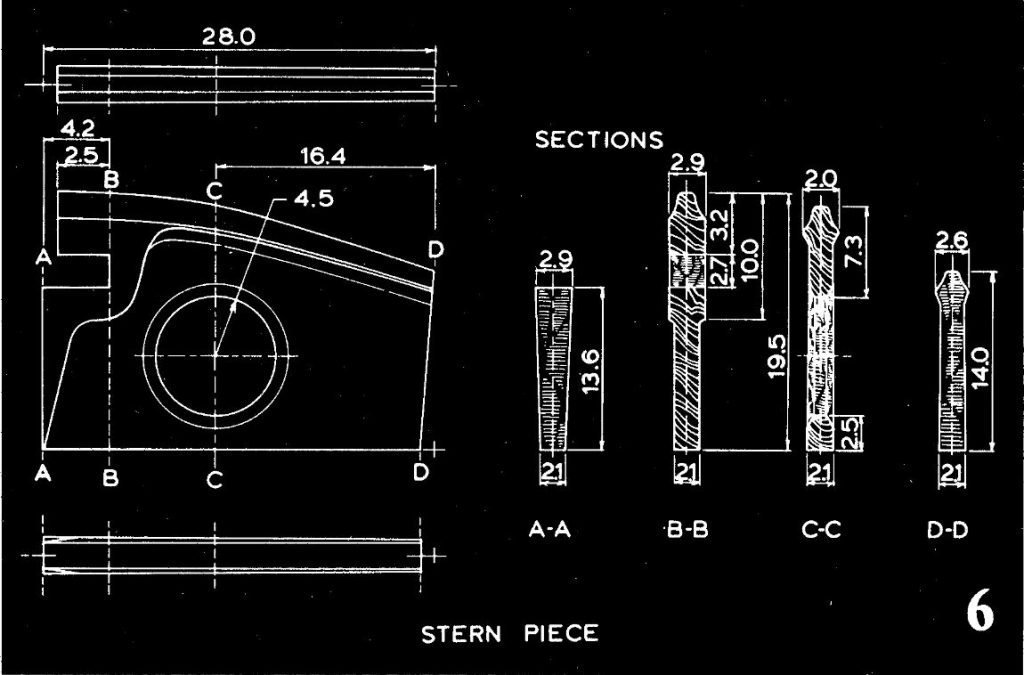 Middle keelson should be left  250cm long, it will later be scarphed to forward and aft pieces and shape it to section AA shown in fig.7

The aft keelson is made as shown in the fig.7 with an overall length of about 150cm. 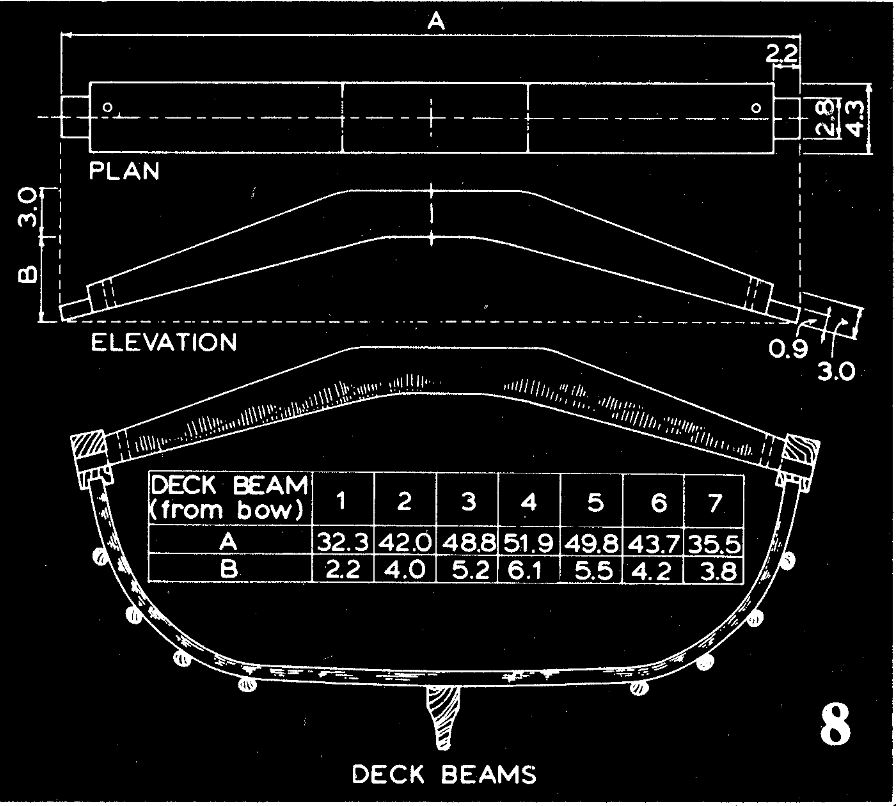 The deck beams are made to the dimensions found in fig.8 The length and midpoint are given in the table above.

Although the finished kayak has a shallow V-bottom, the ribs will be bent with a flat section at the bottom as shown in fig.8 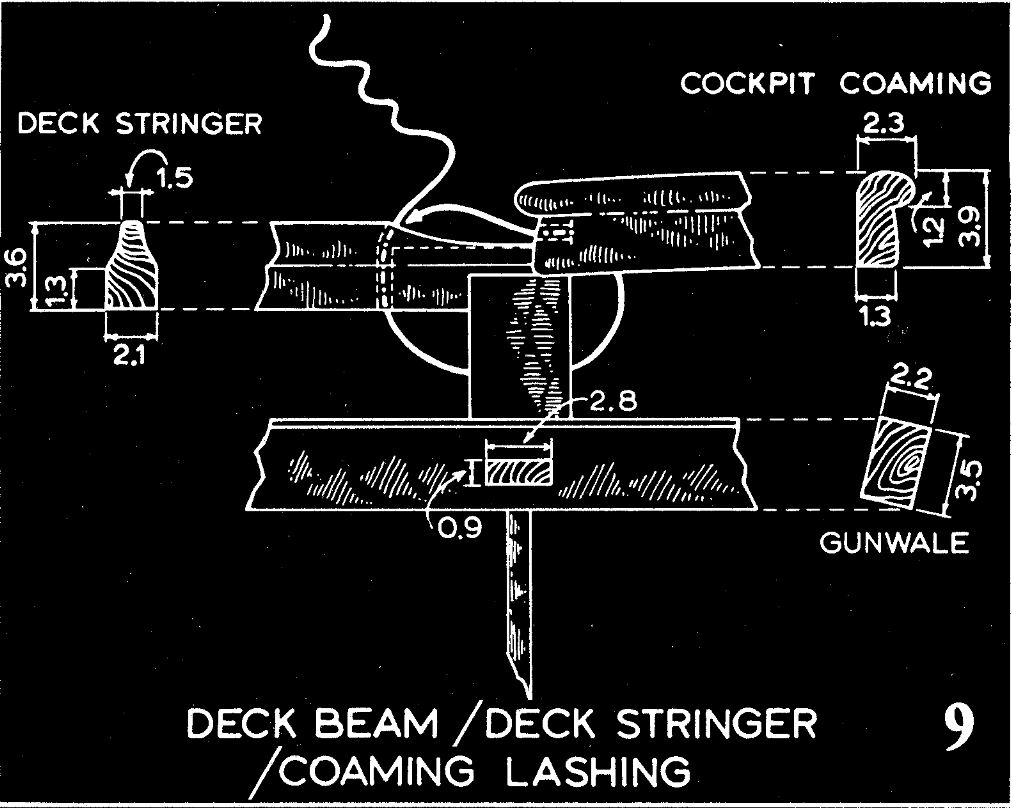 The gunwales – cross sections as shown in fig.9 are cut 3.5cm high by 2.2cm wide and 445cm long. Mark out the locations of the deck beams and cut out mortises about 0,5cm from the bottom of the gunwale. Also, mark rib locations and drill the bottoms of the gunwales with round mortises 1.0 cm in diameter and about 1,5 cm deep to accept the ribs.

Rip the hull stringers our of 16-foot knot free 1 by 6 and make them oval cross-section 1.0 cm by 1.2 cm. The forward and aft deck stringers are initially 240 and 170 cm. long respectively with the cross-section as shown in fig.9 Leave the ends untrimmed until final assembly.

The ribs are with a very slight diameter of 1.0 cm. To avoid breakage, it is best to make all 43 of them from willow shoots of appropriate diameter. If not available use the clearest more straight-grained spruce you can find. Cut them about 70 cm. long. This length will accommodate the longest ribs in the middle of the kayak, but save the shorter leftovers to be used near the ends. 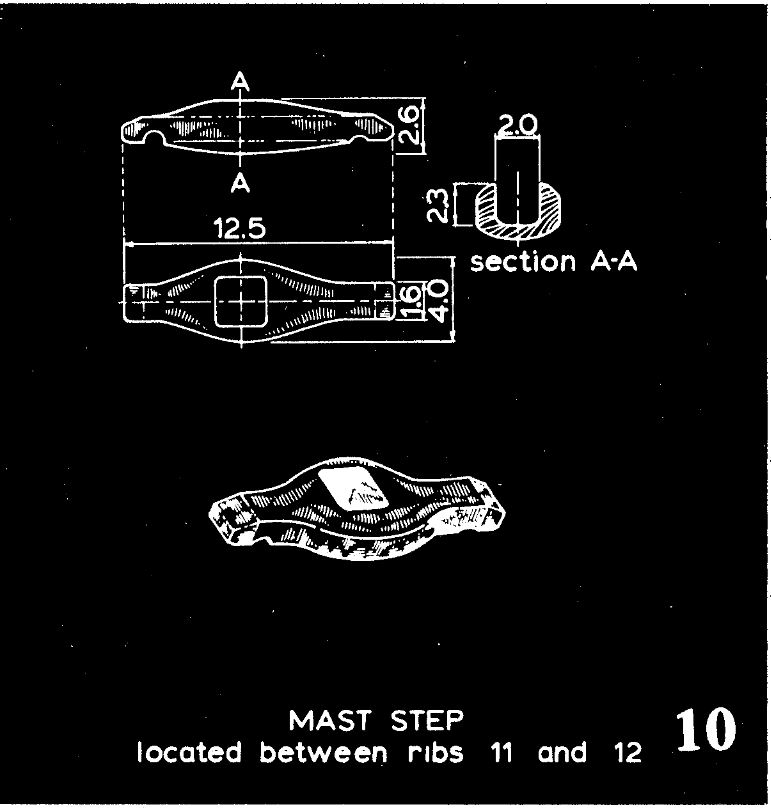 Clean-lined and handsome, lean and fast, light and tippy, the Aleut Iqyax or Baidarkas were high-performance hunting machines. Aleut hunters would venture as far as fifteen miles offshore in them for as long as eighteen hours at a time in rough sea conditions. These kayaks are too good to be relegated to the museums.

Thanks to Mr. David Zimmerly who described each of the seventy-eight individual pieces that make up the Iqyax`s frame now we know how to put them together.

Ok, it is time for lashing all the parts together.

The basic procedure is to join the gunwales to the deck beams and end blocks and fit in the stern piece and the upper bow piece, followed by the deck stringers. Then, the deck framework is turned upside down and the lower bow piece/keelson is fitted along with the other two lengths of the keelson. Next, the ribs are bent, fit in place and faired by “rack of the eye”. Finally, the stringers are attached, then the cockpit coaming and stanchions and lastly the mast step.

You can use two sawhorses, but an apartment floor could be a good assembling platform as well.  Place the matched gunwales on the sawhorses and fit two middle (longest) deck beams.

The gunwales will flare as in Fig.1 Tie them together with temporary lashing as shown in Photo A. 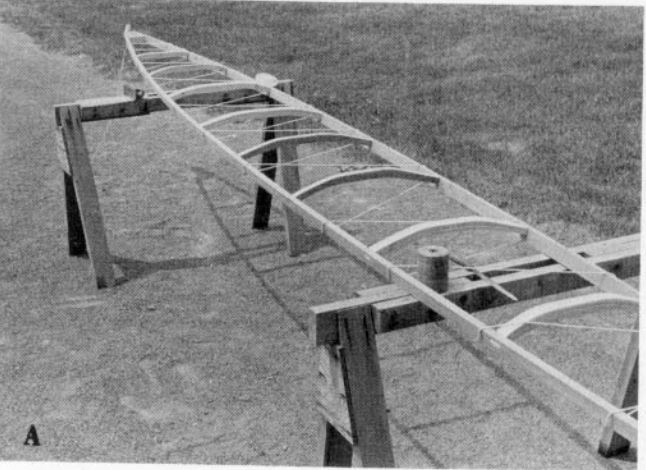 Then working towards the ends, fit in the rest of the deck beams, except for the small round ones at the bow and stern. When you are satisfied that everything is symmetrical but not too tight, drill a hole through the deck beams about 2.5 cm inboard of the gunwale and lash the joints together as shown in Photo B. File notches to recess the lashings.  Thin, braided nylon cord such as fisherman`s net twine will do well. Take about four or five tight raps at every joint. 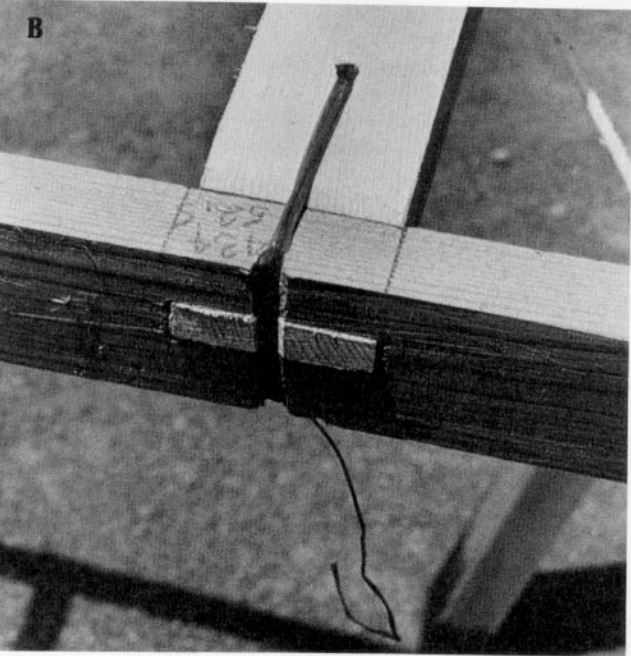 The round beams at the ends need to be cut short enough for the gunwales to hold the (trimmed) bow and stern blocks by friction alone. Drill a 1/8-inch hole from top to bottom through the gunwales at the locations of these deck beams for the lashings. Take several turns from one gunwale to the other as shown in Photo C. 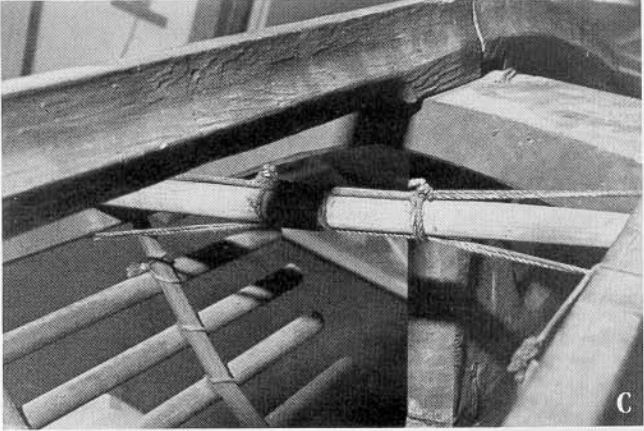 The bow and stern blocks are fitted next. They may have to be trimmed to fit both the angle and flare of the gunwales. Using screws and glue to pin the blocks would be acceptable, but lashings or wooden blocks are better. You can use screws as temporary clamps and remove them after lashing.  To lash the blocks in place, drill holes through them at an angle so that the drill emerges through the middle of the gunwales. Again files notches to countersink the lashings.  Two lashings on top of each side and two more through the bottom of the blocks and out the sides of the gunwales should be sufficient. 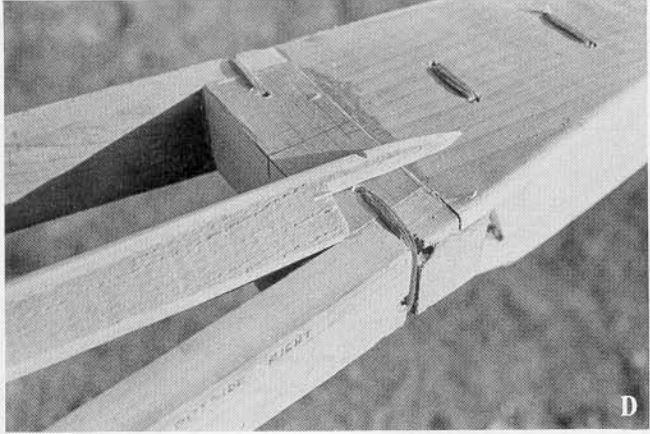 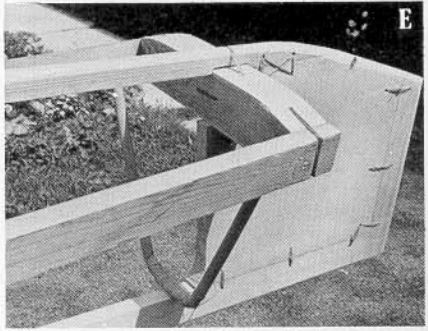 The stern is lashed to the stern block and then th the after deck stringer which is added next.