For as far back as I can recall, kayaking has been my go-to, when I’m stressed, tired, bored, or just want to get away for a while. More than a hobby. A Passion. My Passion. And why wouldn’t it be? For one, It’s a great form of exercise; I mean being able to use a kayak properly alone requires a lot of upper body strength and balance. Every time I  go out to paddle, I literally can feel myself getting stronger and getting fit.

The best part of this is that it’s not restricted to the sport. The confidence that comes with paddling really makes me feel better in other areas of life.

I have that perfectly introverted exterior, but even I need some time away from the noise. Away from the busy schedules; some me time, if I may. What another perfect excuse is there to enjoy being alone than kayaking. Even if you prefer being part of a group, you can go out with your friends and explore an area together while still retaining the privacy of your kayak. So even when you’re in a group, you’re riding solo. It’s perfect. There’s nothing that will clear your mind more than hearing the sounds of nature around you and knowing it’s just you and the world at that moment. 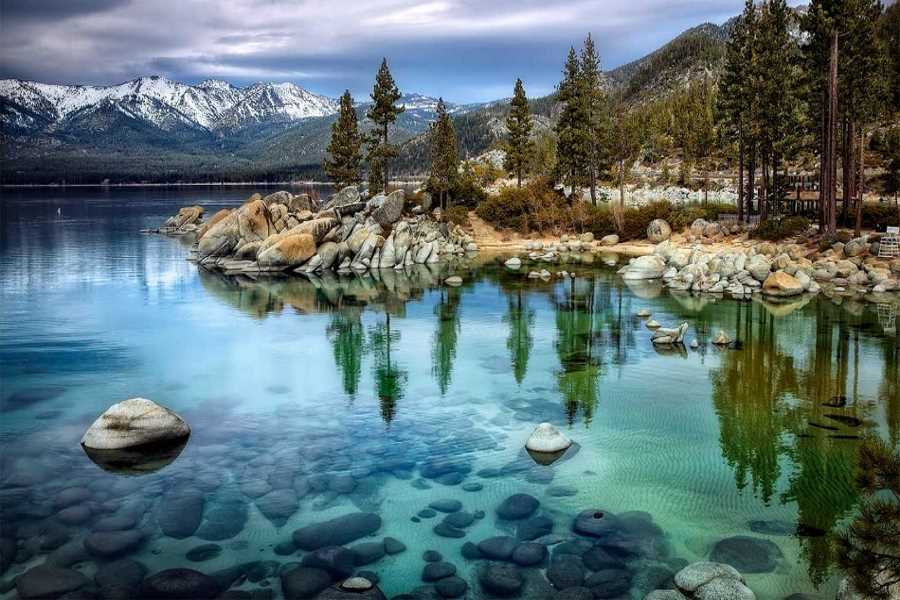 The connection with nature is on a different level as most places that host kayakers are found where there’s an abundance of wildlife and beautiful scenes to behold. Travel deep into some areas, and you might even be able to kayak next to some of the exclusive wildlife and beautiful sceneries. You never know what you’ll find.  There’s very little that makes you feel alive and connected than looking over into the water and seeing scenes and animals you’ve only imagined or heard of in books.

One of such places is Emerald Bay, Lake Tahoe. 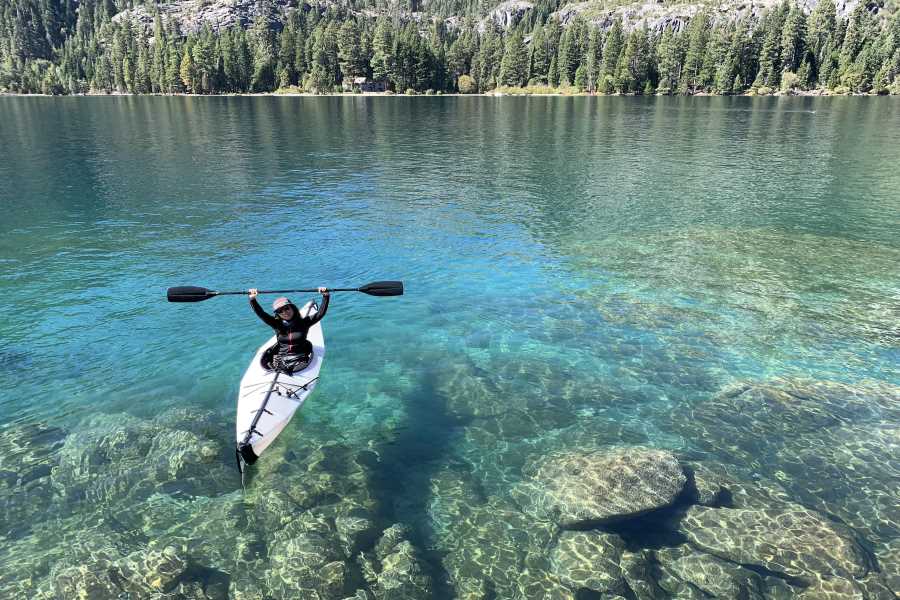 I have been kayaking for the best part of my adult life, and I pride myself on the fact that I am always the go-to guy whenever my friends or fellow kayaking enthusiasts need to advise on the best places to go kayaking for sport or family fun. I am basically the point man on anything kayaking related, and everyone knows it.

I knew it too, so it completely surprised me, to say the least, that I had to learn of Emerald Bay from one of my mutual kayaking buddies who went on for weeks bragging about how he was the best kayaker because he had been to the best destination there is. He would often go on and on telling admittedly good stories about the trip and how it felt completely different from what we had been doing in the past. 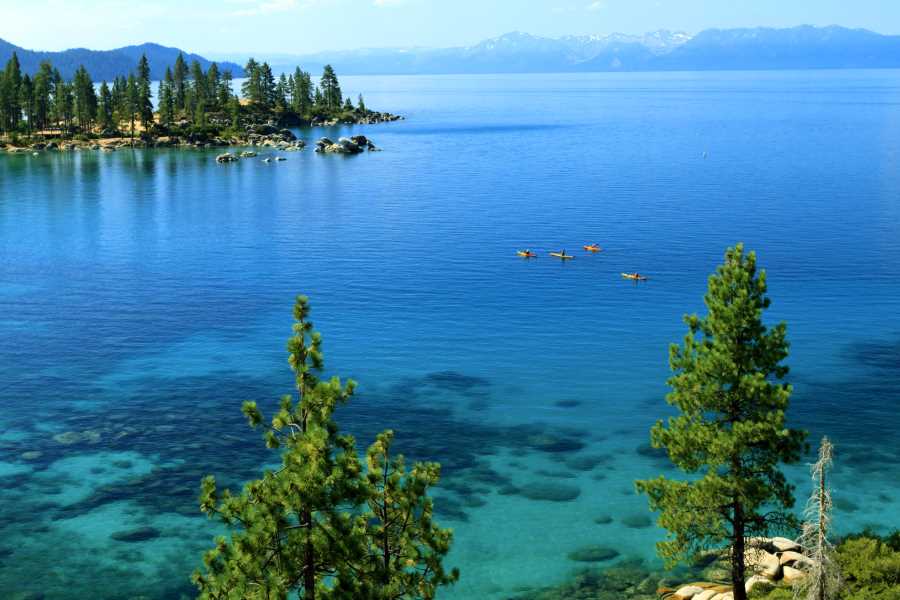 I was jealous, and I wanted that too, I was going to head to Emerald Bay, and I was going to do it alone. At the very least, I deserved to see what he was talking about.  I was determined to regain my pride and see the supposed ‘most Beautiful spot’ in Lake Tahoe. A win-win situation really.

The trip to Emerald Bay

Emerald Bay, without a doubt, is one of the amazing and exciting areas of Lake Tahoe. Boasting of attractions such as Eagle falls, the notable paradise castle, Vikingsholm, astounding view of the various attractions of the Emerald state park, and exclusive access to Fannette Island, the only island in Lake Tahoe. It promised the ultimate kayaking experience. 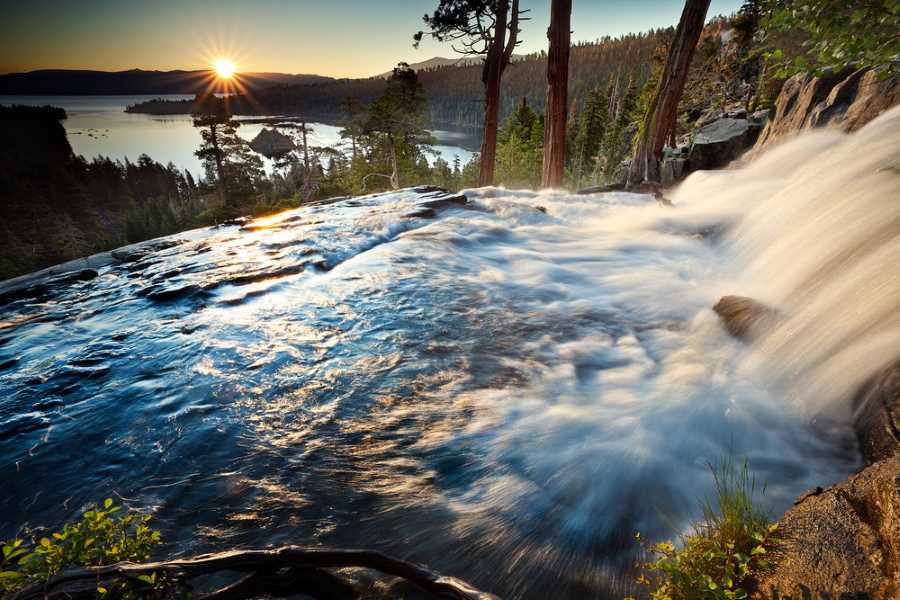 I had the option of choosing between the D.L Bliss state park and Baldwin Beach, both of which are close to the Emerald Bay. I ended up settling for the latter which is just about 5 miles from Emerald Bay. After a long drive-in, the first stop was camp Richardson, halfway to Baldwin Beach to park for, get a decent meal, and find the perfect spot to launch my kayak.

The parking fee was handled less than $10, but it was worth the convenience and safety. I would advise against arriving late if you want to get a parking spot around here. Regular activities are usually up and running at 10:00 AM, so anytime before should be perfect. You can rent transparent kayaks to see through the crystal clear water, it looks fun. 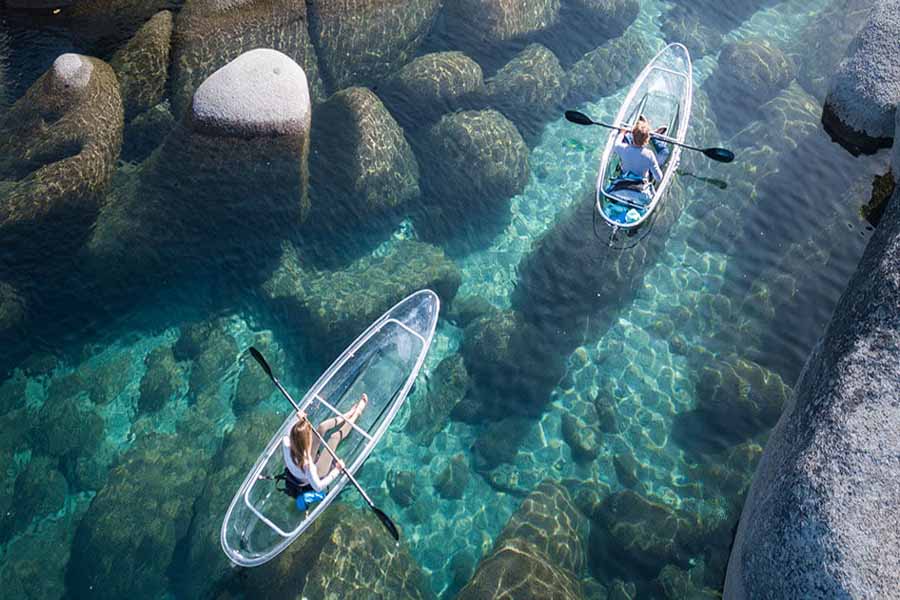 Loading and outfitting gear and essentials into the kayak took about an hour, but it fit perfectly. A couple of other paddlers went a little overboard with the ‘essentials.’ One person, in particular, had serious difficulties in carrying his kayak across the 100 feet distance between Baldwin Beach to the launch spot. Hauling the kayak to the beach launch spot took a lot of effort for me, I couldn’t help but imagine what he was going through.

Next time I will think about getting an inflatable or folding kayak. 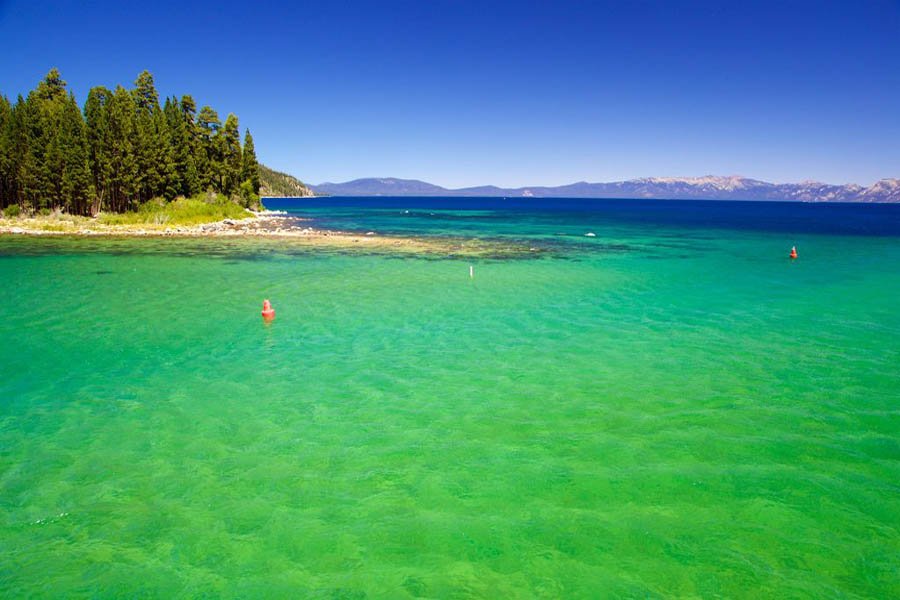 We eventually made it with winds measuring 15 mph settling in on the steep beach. A safety talk was given, and we launched into the water.  About an hour 45 minutes and a couple of miles downriver, we were in Emerald Bay.  It was a rough entry as there was a little congestion caused by the presence of different kayaks, sailboats, and SUPs all trying to get through. With red and green buoys marking the deeper parts of the water, the ¼ mile-long crossing was relatively easy to navigate.

I was able to recline the route I’m supposed to take although it was a bit of a struggle staying off the rocks that were poking near the surface and avoiding the might of Tahoe Queen. Paddling downwards, I could see to the west, Maggie’s peaks with the giant rockslide still reflecting what’s left of the big chunk of the mountain that slid into the bay in 1955. Fifteen more minutes of paddling and I was at a boat-in camp with a rather lovely beach. 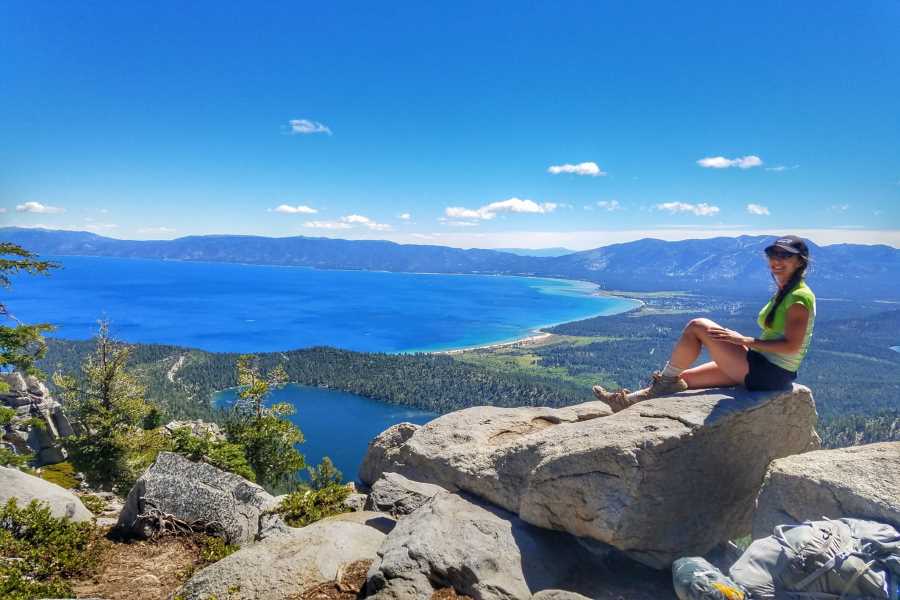 Emerald Bay boat-in camp spread on a steep hill and is carefully planned with Bridges, steps, and granite paths. You get to see the hikers going by through the through-trail along the lake.  The camp was perfect with adequate shade, beautiful view of the lake, bear-proof food protection, a decent bathroom, and drinking water. Most of us from the party camped out here, and I had a nice little picnic and some well-needed rest before I continued on my way.

I paddled for a few more minutes, and I was finally at Fannette island. This, I have to say, was the peak of the trip. The unique island, only one of its kind on Lake Tahoe comes with an exclusive teahouse from the 1930s. The Teahouse, formerly privately owned by Lora Josephine Knight, the owner of the affectionately known, Vikingsholm was originally built to entertain guests.

I paddled up and pulled up the shore, carefully dragging my kayak on the rock to avoid it drifting away and had a 7 to 10-minute walk on slippery rocks from the water to the teahouse.

As I continued, I couldn’t help but notice the amazing views of the mountains and bays behind me. Distant calls of birds provided the perfect soundtrack to line the air that felt like a scene out of a movie. 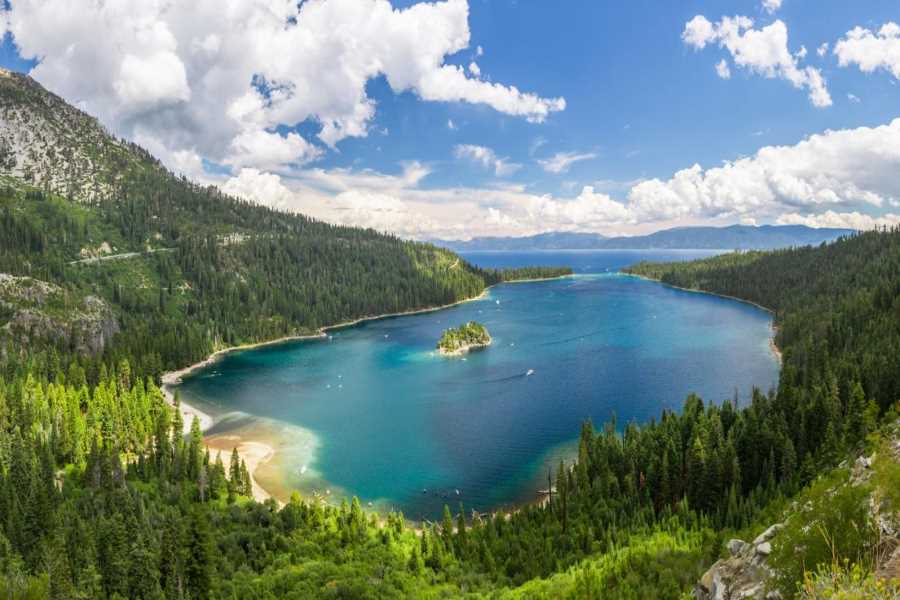 After passing by the last small hill that led up to the teahouse, I could see it already and a handful of people from jet skiers to power boaters that took the trek to see the Teahouse. I walked my way around the rough base before making my way up through the stone stairs to the house itself.

The now roofless building is undoubtedly a marvelous sight to behold, a worthy work of art that truly proves why this place is one of the most popular destinations in the United States. I took some pictures and headed down to the water. With some time to spare and still very intrigued by the beauty and the serenity of the area, I decided to explore the water around the bay and ended up at a place called the sunken forest, while making a loop around the island.

The sunken place, got its name quite literally because it’s the area on the bay where lots of trees have fallen into the lake and gotten stuck there. To see parts of the trees sticking out of the water was fascinating, so I kept exploring with the kayak. You only notice how big these trees are when you get close. 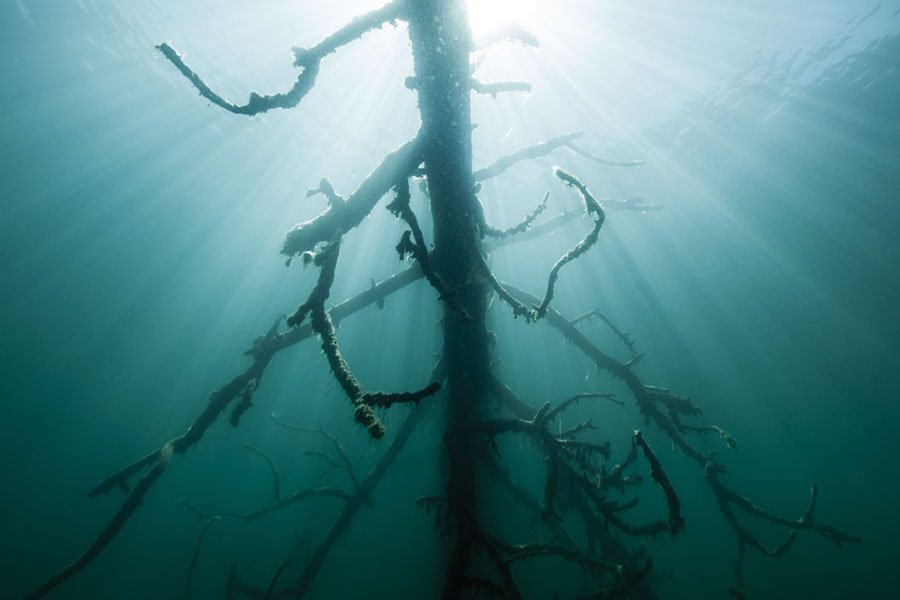 I tried to see how far they went but it was difficult, and I realized I was losing track of time; so I called it a day and headed back to the launch spot. Ultimately this was a once in a lifetime kayaking adventure that I’m immensely grateful for.

From the spectacular mountainous landscapes to the splendor of clear waters, vibrant skies, and magnificent wildlife, Lake Tahoe indeed is a perfect example of the many wonderful kayaking experiences California has to offer, and I can say confidently it was worth it. If you’re considering going on a trip that you would remember for months and even years, Emerald Bay is perfect.

There’s no time like the present. The best time to go was yesterday, and the next best time is today. Well, that’s if you’re properly trained to handle extreme conditions and willing, of course. Otherwise, September is ideally the perfect time to go kayaking in Emerald Bay as the summer waves begin to drift off while still enjoying wonderfully warm temperatures. Early October also works, depending on how the weather acts. So if you’re considering this trip and you should, put it in your bucket list for the summer.

In addition to what you already need like your spray skirt, headlamp, first aid kits, wetsuits, dry bags, and personal wear. I would recommend pogies for your hand, lip balm, and personal flotation device. If you don’t have a kayak available, there are options available for rent.